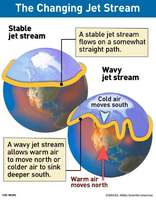 It's fairly simple really. When solar activity is high the Jet Stream flows around our planet in a relatively stable straight line and the demarcation north is predominantly cool and icy whereas the southerly regions are predominantly warm and dry. When solar activity is low, along with a faster rotating Earth, the Jet Stream becomes unstable and "wobbles"  north and south as it flows around the Earth. This forms a "fluted" pattern with northerly positioned flutes carrying warm weather north and southerly positioned flutes bringing down cold from the north. The result is varying climate.

Consider the actual temperature map of North America on April 21, 2021. You can see the gradation in temperature from the coldest (blue) to warmest (green-yellow-red). Viewing the green band the shape of the jet stream causing this polar vortex situation is obviously fluted downwards, bringing cold central American temperatures plunging down from the arctic. This is a feature of Cycle 25 winter and has already shown many record lows for the season, not only here but across the world as well.

Couple this with an exaggerated movement of polar ice (Beaufort Gyre) down the coastlines cooling the oceans and it bodes poorly for the warming Earth scenario so revered by our greenhouse gas "scientists".