Way back when in the dark ages of the 1950's,  I remember playing outside in the burning hot midsummer Sun in Winnipeg, Manitoba.  I particularly remember whining about the heat during midday while finding some shade under the trees to cool off and escape the pounding sunshine (I still do that - hide I mean, not whine). Sitting under a tree was an obvious solution; it is cooler because it blocks the Sun's IR rays and reflects them back up to the sky (the Sun only delivers heat to the Earth in the form of short wave infrared radiation - the Earth then heats the air through convection and conduction).

If you agree, then I want you to also consider the fact that when a big, fat, fluffy cumulus cloud passed over us we were immediately cooled within its shade. When it passed on however we once again felt the burning heat as the Sun was exposed and again poured down all its radiation upon us. The point?  Obviously a cloud, through its ability to reflect the Sun's infrared waves back out into space is a "global cooler", not a "global warmer".

The literature I've reviewed does not disagree. But it does argue about how much weight we should give this cooling effect as opposed to the warming effect of greenhouse gases and our net claims of global warming.  The various components of cooling and heating and estimates of their potency are shown in a couple of images below, known as the Earth's Energy Budget.

The image below is essentially the "blueprint" for the world of Global Climate and also the most recent evaluation of what factors affect that climate. It details how the input of the Sun (seen as a value of 100) is dealt with by our atmospheric and global environments in order to prevent a net rise or fall of the Earth's heat balance and its average temperature. Keeping things equal prevents an uncontrollable movement into extremes and if it is anything that our overpopulated world doesn't need at the moment, it is extremes in its weather.

NOTE: I CANNOT UNDERSTAND THE NUMBERS ASSOCIATED WITH THE GREENHOUSE GAS CYCLE IN THE IMAGE ABOVE. IT APPEARS TO SAY THAT 110 UNITS ARE BEING IRRADIATED OUT BUT THAT 96 UNITS ARE BEING RADIATED BACK TO EARTH IN SOME KIND OF NEVER ENDING CYCLE. THERE'S NO BASIS FOR ASSIGNING THESE NUMBERS. I CAN ONLY ASSUME THAT IT IS DONE INTENTIONALLY TO MAKE THE GREENHOUSE EFFECT SEEM TO BE MORE SIGNIFICANT THAN IT REALLY IS. PLEASE CORRECT ME (WITH DATA) IF I'M JUST MISSING SOMETHING.

* A QUICK EVALUATION OF THE "EARTH BUDGET"

Atmospheric Reflection - total reflection is 31%, Broken down as follows:

1. Earth reflection - 3% - of incoming IR reflected back to space.

Atmospheric radiation - total  from atmosphere back to Space is 24% . Broken down as follows:

1. Ozone - 3% - of incoming IR is absorbed and radiated back to space.

2. Dust and gases - 18% - of incoming IR is absorbed and radiated back to space.

3. Clouds - 3% - of incoming IR is absorbed and radiated back to space.

Earth radiation - the 45 units absorbed by Earth are sent back to space by the following:

1. Evaporation - 19% - formation of clouds by evaporation of surface water. High levels of heat energy are carried into the atmosphere as water vapour and then released (radiated into outer space) when the gas condenses into water droplets (which return to Earth as cold water or ice). Evaporation contributes 19% to removal of Sun's heat, making Clouds a significant global cooler when considered along with the atmospheric reflection effect of 24 %.  Total effect on removing Sun's heat - 43% !

2. Convection - 4% - surprisingly little is attributed to air taking up heat from the Earth and moving it to the upper atmosphere by convection, then radiating the heat out to outer space. This may be because Air does not have the same capacity to hold heat as does water (see clouds) and so it takes a lot of air to carry away relatively little heat.

4. Kinetic heat transfer and convection - 14% -  in another blog I describe how IR heat radiated from the ground and absorbed by CO2 and other GHG's is transferred to Air and then convected to the upper atmosphere where it is removed by outer space. Essentially this means that the 14% IR assigned in (3.) above should really be assigned to (2.) making Air a significant global cooler contributing in the range of 18%. IR radiation affected by GHG's is taken as 0 due to this dumping of its obstructed heat.

*ALL IN ALL - Seems to be a nice neat little package. The things that come to question are how they came to the numbers and ratios that they did and in particular how does Greenhouse gases become so prominent considering it is only present at levels equal to .04 % of the total gas in air, whereas clouds seem to be treated as a minor annoyance when they cover 70% of the Earth's surface and actually account for 43% of the heat disposal? Also, what if the Sun only delivered 95 units of heat instead of the constant of 100 used in the image. How about 105%. We know it varies, we know clouds vary, we know volcanic dust varies, we know greenhouse gases vary. Are they weighted properly in the models being used to determine our futures?  That's the gist of the whole argument - many say yes but many say no.

DON'T UNDERESTIMATE THE POWER OF THE SUN! 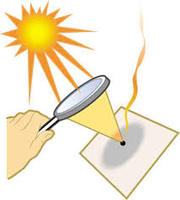 CONTRIBUTIONS OF THE EARTH'S VARIOUS COOLANTS

* CLOUDS are water, plain and simple. Water has enormous capacity to absorb and hold heat energy and it is probably the most significant mechanism the Earth has for getting rid of stored up excess energy beamed in from the Sun during the daytime. Let's look at where we find the Earth's water. The image below shows the majority of it to be in our Oceans.  Considering the fuss we make about melting ice, the amount of water present in these masses is surprisingly small.

THE THERMAL - HEAT TRANSIT TO THE UPPER ATMOSPHERE.

AIR - is a blend of molecules of various types that mix together and move constantly as a blended mass because of the tendency for the atmosphere to be in a constant state of turbulence, generally driven by differences in air temperature. Air composition is as shown below. Note that CO2 and other GHG's are included in the composition of air as really, these overly advertised molecules are nothing more than that - molecules mixing with the mass of all others present.

GREENHOUSE EFFECT believers don't like to talk about the fact that the chart above is dominated by nitrogen  N2 gas and Oxygen O2 gas but there is no escaping the fact that they comprise 96% of the atmosphere and as such they SIMPLY MUST be given significant credit for contributing to climate, climate change, and climate maintenance. I get into detail about how GHG's interact with nitrogen and oxygen in the blog given below but essentially they CARRY AWAY the heat trapped by GHG's and transfer it to the upper atmosphere. As such Air (ie. mostly N2 and O2) is given credit for removing as much as 18 % of the heat delivered by the Sun.

*THE SUN AND ITS CYCLES

The Sun's behaviour is well known and well documented as being volatile and variable. The Sun's surface is visually different if viewed at different times; sometimes barren and quiet and other times pock marked with Sunspots and boiling with energy. The radiation sent to the Earth varies through regularly documented cycles, the main ones being the 11 year cycle and the 60 year cycle where Sun radiance passes through hot peaks and cold troughs that are felt on Earth as climate weather variations.

It is not just infrared that varies however. The Sun radiates other particles towards the Earth that come to us in the form of the "Solar Wind" so well known for interfering with our electronics and communications systems. This Solar Wind also runs head on into the constant stream of electromagnetic protons and nuclei that shower our Earth known as "Cosmic Rays" from outer Space.  And when Solar Wind runs into Cosmic Rays interesting things happen to the Earth's atmosphere.  Stay tuned..... 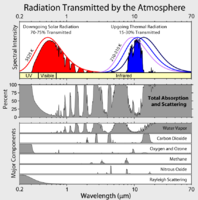 Please note: these images and the discussions surrounding them are easily found on Google. I'm not even going to attempt to make a bibliography because this isn't a scientific paper, it's an opinion piece. If you doubt me go search them out. The exercise is quite revealing.